Accessible Site | Larios on the beach

Larios on the beach

“In 1992, we had the opportunity to open our first restaurant, Larios on the Beach, on historic Ocean Drive in Miami Beach. We did so in honor of my grandmother, Consuelo Garcia, who had made a wonderful career in food when she emigrated from Cuba to Miami in 1962. We also wanted to further promote our culture and heritage through our food as we had done with our music throughout the world. We welcome you and hope that you savor two of the best things in life, food and music!
Enjoy! | “Emilio and Gloria Estefan”

Select the following link to experience our menu.

– Event planning
If you are looking for a venue to host your private event. . .from a birthday celebration, corporate event or a full service wedding reception, Larios On The Beach can accommodate you and your guests in our main dining room or in our ocean view private VIP room.

With a seating capacity of 50 for a sit-down dining experience or up to 75 for a cocktail reception in our private upstairs VIP room, Larios On The Beach will make your special event an unforgettable one.

Please contact our offices for more information on the event packages available.

Nuestros platillos
Flavour for your events

Gloria and Emilio Estefan have been promoting their Cuban Heritage through their restaurants as well as through their music since they opened Larios on the Beach at 820 Ocean Drive in 1992. 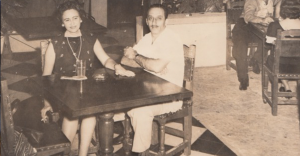 From the beginning, their vision was to bring authentic Cuban food in an atmosphere that celebrates the spirit of Cuba in its heyday right to the heart of South Beach. Gloria’s great-grandfather, Pantaleon Perez (Bottom Left) was the Head Chef at Cuba’s White House during two presidencies and Gloria’s grandmother, Consuelo Garcia Perez (Bottom Right) was already helping him in the kitchen by the age of 12. Consuelo came to the United States at 56 and she started a catering business that allowed her to purchase a home, make a comfortable living and earn the love and respect of all the
people she helped with her humanitarian spirit and delighted with her culinary prowess. Gloria grew up in the kitchen with Consuelo and not only developed a love of cooking but also knew how much her Grandmother dreamed of having her own restaurant one day. And it is for this reason that Gloria and Emilio, who Consuelo loved as if he were her own son, opened Larios on the Beach, in honor of both Consuelo’s dream and their beloved Cuban Heritage.
Larios on the beach became their flagship restaurant as they expanded the vision by opening Bongos Cuban Cafe in Orlando, in Florida’s Downtown Disney in 1996 then Bongos Cuban Cafe at The American Airlines Arena in Miami, Bongos Cuban Cafe at the Hard Rock Hotel & Casino in Hollywood, FL and Bongos Cuban Cafe at Miami Internation Airport. Estefan Hospitality also grew with the addition of the historic Cardozo Hotel on 1300 Ocean Drive in 1993 and in 2006 Costa D’Este, an award winning 4-Diamond property in Vero Beach. It was named one of the top ten celebrity owned hotels in the world and is in Travel and Leisure’s top 100 list. Its cozy oceanside restaurant, The Wave was voted Diner’s Choice Winner Best Overall, Best Ambiance and Best Food on OpenTable. 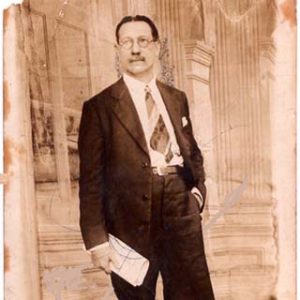 Gloria herself developed the crest that represents the brand. Inspired by the Cuban Crest, it has the sun representing the Gloria Estefan Foundation, which has already donated millions of dollars to many diverse causes, a dolphin and a flamingo both Florida Treasures, an American and Cuban flag laying side by side representing their dual patriotic nature and the Bongo man, logo for the Bongos Franchise. The crest is surrounded by the Hibiscus and the Palm, native to both Florida and Cuba and is crowned with a pineapple, the symbol that sits high atop both Bongos Cuban Cafe Miami and Orlando. 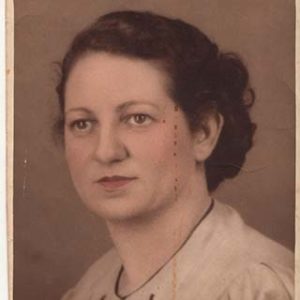 The ribbon under the pineapple reads “to serve mankind”, which is something Emilio and Gloria love to do and was chosen by Gloria both for that reason and as an inside joke that they dare anyone to guess. Winner gets a free drink!
With a clear vision, the Estefans have continually experimented and pushed the envelope, blending Latin, pop and world rhythms that have created a unique style and personality.

This vision transcends the music field and spills over into film, television, hotels and restaurants, among other endeavors. They have supported a myriad of philanthropic causes and through the Gloria Estefan Foundation
they fulfill their life long dream to touch the lives of people in need in real and positive ways.

Their foray into the hospitality business was a result of their desire to promote their culture through food as well as music. With the introduction of Estefan Kitchen, have infuse more of their roots, history and experiences into their already well established properties, taking them to a whole new level and preserving their legacy for their children, grandchildren and future generations. 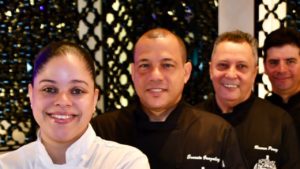 Our Team
”When you walk into any one of our restaurants, you’re surrounded by Cuban music while you eat. So it’s food and music, two of the best things in life. Our restaurants allow people from all over the world to discover Cuban food, and learn more about our culture and our heritage. Generally speaking, people think that Cuban food is very spicy, and it’s not that way at all. We marinate a lot, so the dishes are very tasty and richly flavored, but not very spicy. For us it is very important that our food is healthy without losing the spice and the flavor that characterizes it”. Gloria and Emilio Estefan

Our Corporate Executive Chef, Cristina Coupet along with our culinary team (many of them have been with us for over 25 years) understand that vision and execute it magnificently.” 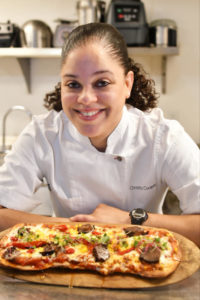 EXECUTIVE CHEF
Christina Coupet
Chef Christina Coupet found her burning passion for cooking at the young age of 5. Growing up in a Haitian family, she vividly remembers when she learned how to hold her first knife, “I loved the sizzle of the meat as it hit the pan, the delicious smell of freshly baked bread, as well as the combination of the different spices”.

Inspired by her passion, Chef Christina earned a degree at Johnson & Whales in Rhode Island and began her culinary career at the Rhode Island Country club. Christina started as a dishwasher, and then worked her way up the ladder to become a busser, server and bartender. This led her to becoming a Chef at notable restaurants such as Jean George’s Vong in Manhattan, the iconic Fontainebleau Hotel in Miami Beach where she became the first female Chef de Cuisine of the hotel. She then joined the Carillon Miami Wellness Resort as Executive Sous Chef before Estefan Hospitality recruited her as the Corporate Executive Chef.

Select the following link to experiance our events.